One of the questions I’m asked most often is this: “Is it an advantage for a beginner vaulter if they already know how to ride?” Like all good questions, there is no simple answer as there are pros and cons on both sides! For an outside observer, it’s not a well-understood issue at all. Some people expect that all vaulters can also ride. Others have heard that in some countries (e.g. Germany) it is common to learn to vault before learning to ride. Some people also feel that it’s not a good idea to mix the two, because you’ll take good habits from one discipline and turn them into bad habits in another.

There aren’t many straight-up truths about this, but here are a few to start with: 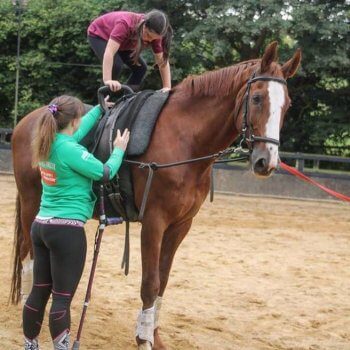 So, back to the first question – is it an advantage to be a rider?

Here’s the ‘yes’ side: if you already ride, you will probably already be aware that horses are big (this comes as a surprise to some people) and that we need to behave sensibly and kindly around the horse. You’ll know how it feels when a horse walks, trots and canters beneath you, and you’ll know the main ways in which a horse communicates with humans. If the horse does something horse-like, you will know not to panic – I recently saw an adult beginner rider lose his balance and his nerve when his horse stopped briefly in walk to scratch its itchy nose!

On the other hand, you will have lots of ingrained habits which aren’t useful in vaulting. For example, the idea of running alongside your horse for anything other than a trot up may seem unusual, but nothing like as bad as the way we have four children running around the horse, one at each leg, with them darting behind him when they change position. Learning that you can pass behind a vaulting horse and even dismount over their tail and hindquarters is an idea that makes most riders wince!

Being a rider also affects the way you move with the horse, particularly in the canter. In basic seat in vaulting, we sit astride with our legs long and toes pointing down (another sticking point!), and our arms out to the side. Our hips absorb the movement but do not influence it – the quality of the canter is primarily the lunger’s responsibility, and the vaulter must not look as if they are ‘riding the canter’. The first time we put most riders up on a vaulting horse in canter, they tend to push their heels down, try to create impulsion (or maybe balance?!) with their seat and sit up so tall that they are in what we call a ‘fork seat’, which is heavily deductible. The idea of sitting like a sack of potatoes and doing nothing is anathema and the physical challenge of ‘doing less’ shouldn’t be underestimated! It’s certainly not something I’ve mastered yet…

Another common thing I see in new vaulters who have ridden before is a general sense of incredulity whenever you suggest a new move. Those with little to no experience with horses are generally a lot happier to go up to their feet or to go ‘around the world’ as the horse is moving than vaulters who have ridden for a long time. Those in the latter group tend to keep their riding brain in the forefront of their minds for a long time, and will frequently express sentiments along the lines of, “You can’t be serious!…Wait, are you being serious?!”

So, what if you haven’t ridden before? Well, some of the advantages are as outlined above, and they can basically be summed up as ‘ignorance is bliss’!

Vaulters who haven’t ridden before don’t know about pushing their heels down, influencing the horse’s way of going, or some of the scarier things that can happen around horses. Because the whole situation is new to them, they (might) listen more carefully and be more confident about trying something out. There isn’t an argument going on in their head between Rider Brain and Vaulter Brain – although, for everyone, there’s a level of disagreement between Vaulter Brain and WHAT ARE YOU DOING Brain!

Whilst there are some habits that are common in vaulting and unusual in the rest of the horse world (and I’m not even going to get started on lungeing today) there are also so many ways in which vaulting – even at a low level – can improve your riding. Since it’s always nice to end on a positive note, I thought we’d finish with some of those benefits!

Firstly, you should hope to see some physical changes. If you decide to do vaulting on a regular basis, at some point your butt will get kicked into shape and you will be fitter, stronger, and more flexible in no time. If there’s not a vaulting club near you but you’d like to see some of those changes, then catch next month’s post – I’ll pop in some exercises you can do at home, just in time for any fitness-related new year’s resolutions!

Secondly, you’ll gain confidence. I could write a whole post on this, but I’ll save it for another time. Suffice to say, for now, that before starting vaulting I had lost a huge amount of confidence. These days, it’s a lot better!

Thirdly, the connection you gain with the horse is completely different to that which you get from riding – and, therefore, it’s worth experiencing for when you’re next jumping, doing a dressage test, or just handling a horse on the ground. This is yet another whole post for the future, but the main point is this: when you’re not the one telling the horse what to do, but you are heavily dependent on the horse’s state of mind for your continued existence, you learn to develop the listening side of your communication skills instead of the talking side.