Welcome back, I’m going to focus this blog on my experience at the NAF Five Star Winter Dressage Championships at Hartpury! As you’ll know if you read my last blog, it was ultimately so unexpected to qualify for the Nationals – that really was the biggest achievement. It took a while for it to sink in and to change our focus to the National Championships and start preparations for that. I’m not deluded – I was very aware that at the Nationals we would be up against the winners from every Regional Championship throughout the whole country, so my main aim was simply not to come last!  Placing in the top half of the class would be a dream but I’m very honest about Ruin’s capabilities and knew that he wouldn’t be in the same league as a lot of the flashy horses we’d be competing against. As a result I felt zero pressure because there was zero expectation – it was phenomenal just to qualify and be there so we wanted to have fun and enjoy the whole experience.

As soon as I knew we were going to Hartpury I contacted my trainer, Gareth Hughes, to cram in some lessons. Our first was great and really productive. Lots of homework for me to do, which I love. I got home and made notes on everything I needed to work on and felt really motivated to get cracking! Our next outing planned was an arena hire at Hunters Equestrian. They have gorgeous arenas and some with scary dressage boards so I felt that would be ideal to practice my test with Ruin, particularly as he had never been to Hunters before so it would be a good challenge for him to relax in unfamiliar surroundings. Unfortunately this was timed with the gale force winds we had and so Hunters sensibly cancelled that day’s sessions. This was really disappointing as, although I agreed with their decision, there were no other similar arena hires with white boards for me to organise before Hartpury! Fortunately it wasn’t long until our next Gareth lesson and our final one before the Championships. I was pleased that a lot of the things I had on my ‘to sort’ list from our previous lesson could now be moved to the ‘achieved’ list! We ran through most of the test in separate parts and I was pleased that we had test riding strategies in place to get the best performance we could at Hartpury. As well as the riding side of things it’s also incredibly important to make sure Ruin is physically feeling good so he has his pre-Nationals physio session a week before. We use the phenomenal Hannah Complin from Vet Physio UK, who not only does the best of jobs, but also amazingly puts up with my ridiculously irritating Ruin!!

Next stop…the NAF Five Star Winter Dressage Championships! I’m not going to lie; it was basically a disaster. I was third last to go in the class (a big class of 30) and in the afternoon, so we had lots of time to clean Ruin and plait him, arrive and give him time to settle. We wandered around to suss it all out and check which arena we would be in. At the Championships there are two ‘series’ – the Petplan Championships, aimed at the amateur riders, and the Winter Championships, predominately professional riders. The Petplan classes are outdoor in two arenas and the Winters are in the indoor arena, however you simply cannot fit all of the Winter classes in the single indoor every day, so each day one of the Winter classes goes in to one of the Petplan outdoor arenas. Typically on the Thursday it was my class… I wouldn’t normally have a particular issue with this, however the weather forecast definitely meant I wished we were in the indoor! We had the worst of the weather; we got completely soaked within minutes of being in the warmup. I felt awful for everyone who came to support me; it was freezing, drenching and really miserable. Despite this Ruin warmed up really well and I went in to the test feeling positive. However on our first centre line where we are supposed to just canter in and halt at X – Ruin did four flying changes before the halt, where he slammed on the brakes and near landed on his head!! Bear in mind that zero flying changes are required or were asked for before the halt. That dramatic start pretty much set the tone for the rest of the test! Starting on a 3.5 is never great…There were some nice bits, lots of good trot and the serpentine of changes was great and his medium and extended trots and canters. But we had lots of issues; in our collected walk the rain was so heavy Ruin just went sideways and did a bit of a swing-around instead of one of the walk pirouettes – normally a good scorer for us. At least one judge sympathised and commented on the sheet that it was a rain reaction. Ruin also thought one of my canter half passes was a line of tempi flying changes and as soon as I came out of the corner he began the changes! He then just just couldn’t understand why I was trying to move him sideways…got completely stuck and practically stopped – he literally cantered on the spot and I had to do a fair few pony club kicks to get him actually moving forward. So that was also very expensive – I even scored a lovely 1 from one judge! Overall it was a bit of a shambles. The warm up was definitely a reality check because most of my fellow competitors were passaging and piaffing on very fancy horses. However none of that really matters; Ruin tried his heart out (in a way…) and qualifying in the first place WAS the achievement. Plus we didn’t come last so there’s that! It was gutting not to produce our best work in the arena and our 63% was actually our worst score yet – what a time to get it! At least next time I go it can only be better… 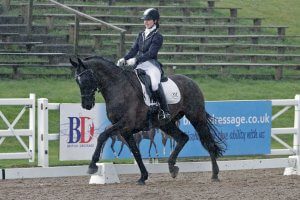 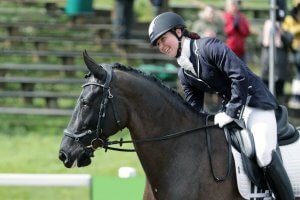 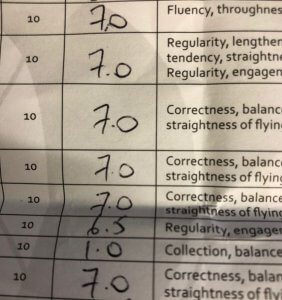 So that was our experience at the Championships; not what we hoped for but a great experience nevertheless. Now normality resumes! Ruin will have a little holiday for a few weeks then we begin our next mission…PSG! My aim is to get him out at PSG in the next few months and qualify him for the Midway Championships at the end of August. I say all this in a whisper as best laid plans… Tune back next time to see how we’re getting on!