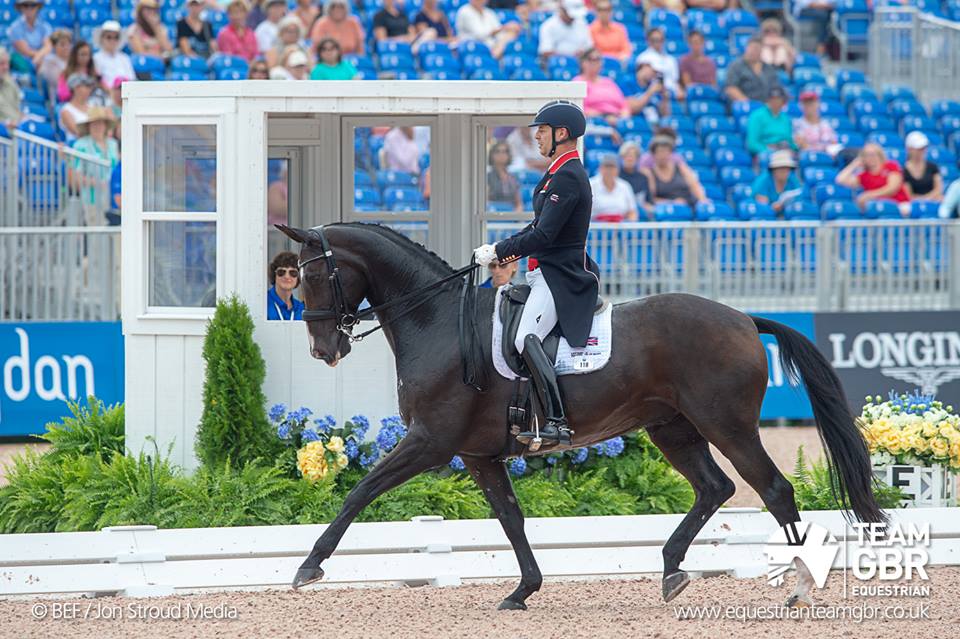 The first combination for Britain, drawn tenth, was Spencer Wilton, from Reading, with Jen Goodman’s 15 year old Super Nova II in their third Championship together but acting as pathfinders for the first time for an early draw.  The pair put in a very strong test, scoring 74.58% to get the British team off to a fantastic start.

“He felt amazing, really good.  He does get nervous but I felt him relax as the test went on.  The nerves did show in his first piaffe but I’m so pleased,” said a delighted Spencer.

“It’s been a difficult year with injuries to both of us but it’s brilliant to now get the job done.  He’s 15 now and fully grown up and he’s learning to deal better with the big atmosphere.  I didn’t mind going first and knew it was really important to get a good mark for the rest of the team to build on so I’m glad I did my job.”

“He’s a very young inexperienced horse and went into himself a bit so sadly he didn’t shine quite as much as I know he can.  He’s an incredible horse but he’s never seen anything like this,” Emile said.

“Spencer [Wilton] was magnificent this morning and Carl and Charlotte are seasoned professionals but they’re on young horses too so we’ll have to see what happens.”

Germany hold the advantage after the first day, Sweden second, the USA third, and Great Britain narrowly in fourth and the Netherlands fifth. The third and fourth riders will compete tomorrow in the second day of dressage Grand Prix in the US Trust arena.

Following the start of the endurance race this morning, the competition was stopped after the first vet-gate, before being re-started as a 120-kilometre championship, after some teams were misdirected at the start of the ride. Unfortunately before the confirmation of the re-start, Dominique Freeman and her ride, Rising Heat, failed to complete the first loop and withdrew.

During the course of the afternoon, the decision was made by the President of the Ground Jury, Technical Delegate, President of the Veterinary Commission, and the Organising Committee, to cancel the remainder of the endurance competition due to ‘a potentially dangerously high combination of heat and humidity, and the conditions out on the trail following heavy rain this afternoon’, taken with the welfare of the athletes and the horses in mind.

Riding superbly through their first two loops of the restarted event, Britain’s Caroline Cowley, from West Berkshire and Nicola Thorne, from Norfolk, presented their horses HS Bellini owned by Caroline, and Grand Ku, owned by Heather and Jeremy Reynolds, which both passed the final vet inspection.

British Equestrian Federation, Chief Executive Nick Fellows said; “We support the decision taken on the grounds of athlete and horse welfare, but are disappointed with the events of today and welcome the outcome of the FEI investigation. I would like to congratulate our athletes and their crews who have worked so hard to train for this championships.” 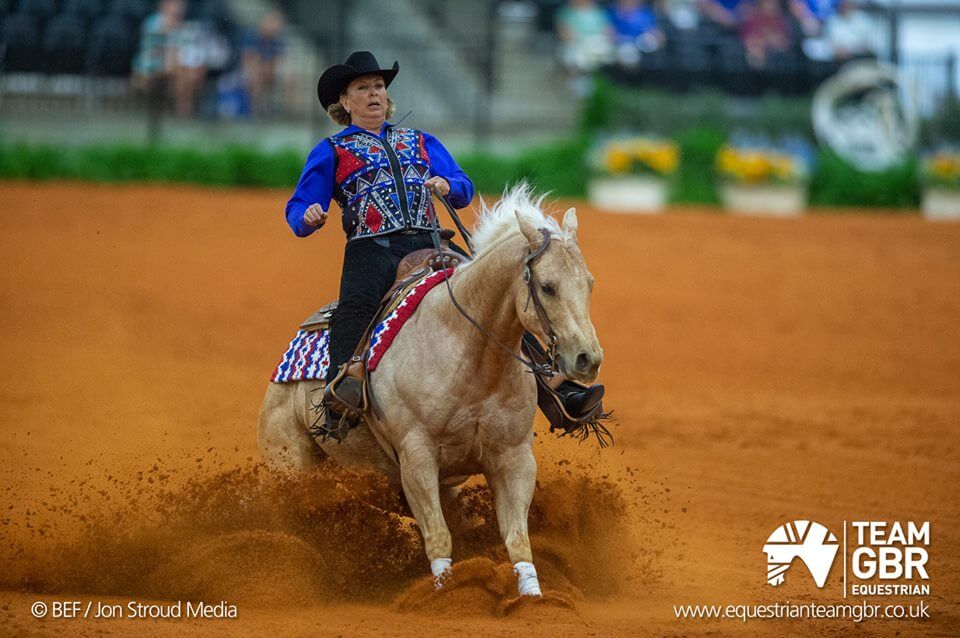 Kent’s Francesca Sternberg has progressed into the Second Individual Qualifying Competition after finishing 26th this afternoon with Rosanne Sternberg’s, Spook N Sparkle. Francesca, competing at her fifth World Equestrian Games as one of Britain’s individual competitors, will contest for a place in Saturday’s final in tomorrow’s competition, needing a top five finish to qualify.

Commenting afterwards: “It was a fantastic experience! It was a very, very big pen for a very small horse and a small rider so it was like the desert for us out there! There has been a British representative at every single World Equestrian Games and me and Alison [Bucknell] wanted to fly the flag so it was an honour to go out there today with Charlie [Spook N Sparkle].”

Alison Bucknell, from Gloucestershire, swiftly followed Francesca in the competition order and made a strong WEG debut with her own Jac Barbee Dream. The pair scored 209, placing 54 which unfortunately means they won’t progress further at the Championships.

“I’ve got quite a small horse and I think he found it quite tricky in there as it was a huge arena but he tried his heart out and he gave me everything he had. I couldn’t be more pleased with him,” said Alison. 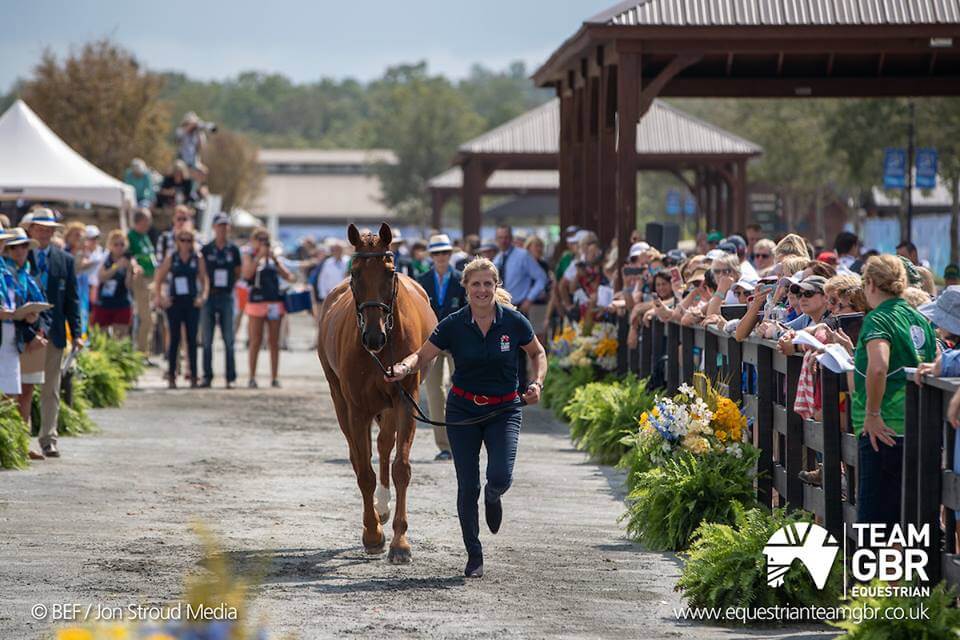 This afternoon all five of the British horses passed the first Horse Inspection; the team is confirmed as: Gemma Tattersall, from West Sussex, with The Soul Syndicate’s Arctic Soul, Northampton’s Piggy French with Jayne McGivern’s Quarrycrest Echo, Gloucestershire’s Tom McEwen with Jane Inns, Ali McEwen and his own Toledo de Kerser and Lincolnshire’s Ros Canter with Caroline Moore and her own Allstar B. Tina Cook, from West Sussex, and Elisabeth Murdoch and Keith Tyson’s Billy The Red will represent Great Britain as the individual combination.

The Mars Inc. eventing competition gets underway tomorrow with the first day of eventing dressage.

Live results from all the competitions can be found here: https://tryon2018.com/officialresults

For information on how to watch all the teams, take a look at our coverage guide