Welcome back! I cannot believe it is now the end of June…this year is racing by.

Reflecting on May it was a busy month. I’ve taken on Lisa Lessels’ horse Fozzy, which is really exciting! His vital stats: 7 years old, chestnut gelding,16.2hh, Irish Sports Horse, done basic schooling in dressage, showjumping and cross country but a pretty blank canvas with a fab temperament! I have spent the first month building a bit of a rapport and focusing on his flatwork before doing some showjump sessions (at home) with him. I think it’s important when they’re young and green and you’re an unfamiliar rider to not rush things, because while you might feel ready to crack on I want him to feel he knows and can trust me and the questions I will ask him, particularly when jumping. After putting my stamp on him we decided to get out and do some cross country! His first session was amazing; he was such a superstar, jumped everything with near no hesitation including popping over the ditches as if they weren’t even there! He literally

didn’t put a foot wrong. I didn’t push him as he’s only young and green, but he practically cantered over the jumps so after watching the videos I felt maybe I needed to pop some bigger ones the next time…! 10 days later we took him for another cross country outing at a different venue, and again he was just great! The two main aims were to step up the speed and step up the size of the fences – considering he made 80cm look like 2″ poles the last time. Well, mission accomplished. He was so fab, jumped such a variety of decent solid fences as well as all the ditches, water etc – so unphased by everything! He really opened up n zoomed along effortlessly when asked, happy to jump from a bit more speed too. So thrilled with him, this summer eventing season is looking very exciting! We have already pencilled in a BE90 for July so fingers crossed preparations continue to go to plan and we can work towards that. My top mantras are ‘Don’t practice until you get it right, practice until you can’t get it wrong’ and ‘Fail to prepare – prepare to fail’, and that’s how I plan my riding sessions. Assuming we can continue to cross the t’s and dot the i’s we have some great competitions to look forward to!

On the dressage front Ruin did go to the competition we had pencilled in and we did the Advanced. The only reason I decided not to do the PSG was because I wanted to ensure we could get the tempis in a test, considering our Advanced test in December was supposed to include several and in fact included near zero…! A week before I double checked the test to remind myself where we were going, to realise it wasn’t the test I thought I had entered! I thought I was doing the same test as last time but no…and thiswasn’t a good thing. Instead of small 5m travers circles we had proper half canter pirouettes and instead of lines with 3 sequence changes we had 5. So to be honest it felt like we were pretty much doing the PSG… I went in knowing the pirouettes wouldn’t be super tiny as he is learning to balance them, but he understands the idea and they could be quite smart. My main aim was to get all my tempi changes! Well he was an absolute star. We did a mistake-free test and he tried his absolute heart out – we had worked really hard the week before, obsessing on the little errors that kept creeping in, even the day before the test we had a long session, but it all came off at the competition and he was on point! I could not have been more proud of him.

The fact he won with a fair 65% was the cherry on the cake, and this time it wasn’t because he was the only one in the class! Ok there were only two of us….shhh. I was thrilled that we got our tempis and got 7.5. I went home feeling really chuffed and elated, ready to crack on for PSG. And then I watched the video…oh dear – definitely a case of pat the horse and slap the rider! It looked awful. No criticism of Ruin, if anything I’m extra impressed he did so well when I rode the test and him so badly. It wasn’t anything catastrophic but schoolboy errors and I really do know better. I had him too high in the frame in all the trot work so he wasn’t working over his back properly and it made him look tense and hollow at times. I wasn’t collected enough in some of the canter work, in particular going in to the pirouettes where I practically approached them in medium canter! Poor Ruin, how on earth is he supposed to do a half pirouette from that! He tried his best but we got a deserved 5 and 6, and considering they are double marked movements that’s very costly. Again my fault, not his. To top it all off I was starting to resemble quasimodo again. Chest out Holly! Wonderful… So 65% was actually incredibly generous really; I think I would have given myself nearer 55%. Fortunately that is what we video the tests for – self reflection. There is no point having rose tinted glasses on, blaming the horse or Judge bashing. I’m afraid I have no time for any of those things. You need to be really self critical and take responsibility. How the horse goes is a reflection on your riding and your training! So a big lesson learned and lots of hard work to do. I’m feeling very motivated though, because if we can get 65% from a top Judge doing that kind of test then what will we score when I’m satisfied with it!! 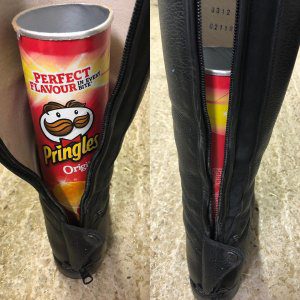 Now for something very random… Those that know me well know that I have a bit of an obsession with Pringles, particularly the Original variety, and go through several tubes per week…in fact they now have their own recycling bag! I like to promote extra uses for Pringles cans, as they can have a life after ‘work’, for example I cut them in half and use them for putting pens and highlighters in. However I have actually outdone myself this time. I have found the tubes are amazing riding boot trees!! They are slim enough to fit in perfectly and keep the boot upright, stopping them flopping over if they are soft boots. In addition, if you use a tin opener to cut off the base they are fully ventilating as they are open both sides, so your boots can dry and breathe! I mean basically perfect. I am a genius. I have a large collection of empty tubes so anybody needing some for these ‘extra uses’, just shout. And any other ideas for Pringles cans please do throw them my way!

There are lots of things to look forward to in June. More outings with Fozzy as we prepare for his first event. I have a Gareth lesson for Ruin booked for next week and his first PSG pencilled in the diary, disaster avoiding. If all goes to plan you can count on a very emotional blog next time!