Welcome back! November and December were jam packed full with lots of lorry outings and a quest to qualify for the Regional Championships…have a read to see how we got on!

First outing of November was Bertie and we had an ‘interesting’ competition outing doing an Advanced Medium Freestyle, aiming to complete his Regional qualification. He warmed up beautifully and calmly, then had a walk breather before I picked him up again..as a dragon!! I managed to keep a lid on things but he was completely wound up by the time we went in for the test and it definitely felt like damage limitation! Managed nearly 66% which I was definitely very pleasantly surprised with. The highlight has to be the final centre line where we’re supposed to just trot to the final halt…however Bertie turned on to the centre line and literally legged it!! Completely not the plan Bertie, but in some tests you do have an extended trot down the final centre line and that was clearly what Bertie thought we had to do. I had my work out to stop him at all as he ran off 100mph towards the Judge, but I was determined to get my salute in time to the music, in whatever style necessary… At least he’s now qualified for the Winter Regionals! 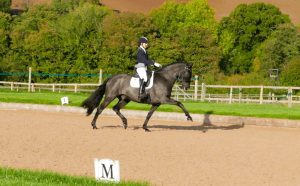 Next up was Ruin as we attempted another Inter 1. Well on the positive side we did win, although being the only competitor in the class tends to have that result! I deliberately didn’t jazz Ruin up too much in an attempt to prevent him throwing in 1 tempis, which did work… however we had many other mistakes and they were pretty expensive ones which is frustrating. For example; Ruin tried to do the final zigzag half pass on the wrong canter lead and got his legs in a bit of a twist – scoring a lovely mark of 5! We had a few more 5s and even got a 4 as well. So really pleased and stunned to still manage 63%. I was actually really happy with Ruin, we may have still had mistakes but we tried another tactic and while it didn’t exactly pay off Ruin tried his best. Annoyingly I missed our final qualifying mark for the Regionals by less than a percent, so once home we raced through the competition calendar to find another Inter 1 before the end of November – we had one week left!

Cue a trip to Stourport RC, a new venue for us and definitely one we’ll be returning to. The test started really well with a 7.5 but after a few good movements we went around the short side of the arena by the Judge as a quad/tractor drove right by us…poor Ruin bless him just completely lost his focus. He’s not a spooky horse at all but he became really distracted and our next move – the reinback – was a struggle as I had to practically shout “earth to Ruin!!” You don’t have the luxury in the Inter 1 of time to get things together and refocus your horse — everything comes up really quickly and it’s one tricky move after another. So I had to crack straight on with the horrible feeling of no longer being on the same wavelength as your horse. Not surprisingly we had a couple of expensive mistakes where I couldn’t quite keep Ruin together.  However we got a clean line of twos so really pleased with that, even if we had an ad-lib in the threes! Hard to be disappointed though as not a bad score at all, which was surprising after the errors and when it’s a notoriously tough List 1 judge. She made some lovely comments too which I was very chuffed with. It’s really nice when you feel the Judge understands what happened in the test! I popped back in to the warm up to finish on a more confident relaxed note and he felt just MEGA – thrilled to have left the main arena – if only we could show the judge that! Unfortunately again just below the score we needed to complete our Regional qualification. You have to qualify by the end of November and this was the final day of November so our last opportunity. It’s frustrating in that I feel we were so close but couldn’t quite make it. However he’s only done a couple of Inter 1s and actually only did his first PSG in July, so he’s done amazingly well and I’m really proud of him.

The next day we were out in the horsebox again – another day another show!  Something a bit different though as this time we took Fozzy to Summerhouse for their Eventer Challenge, his first competition since Eventing in September. Now I won’t lie – I wasn’t particularly looking forward to it in the  morning because it was FREEZING!! It was an amazing outing though and Fozzy was a star. We had entered two classes – 90cm and 1m. We started with the 90cm as a warm up class and a height he’s familiar with and he did a lovely double clear, just a bit too quick in the timed section, to finish 6th out of 29 starters! So that was unexpected and amazing! Then we did his first 1m and he was ace. A couple of errors which I feel were rider error and that annoys me! The aim was purely to give Fozzy more jumping experience and to start to move up height-wise ahead of the 2020 eventing season. A few weeks later Fozzy was out again as we went to do the Eventers Showjumping at West Wilts. I was really pleased to put in to practice what we learned at Summerhouse for much smoother rounds and we finished 4th in the 95cm and 3rd in his first 1.05m! Between Christmas and New Year we took Fozzy to a XC clinic at Pontispool where they have proper XC fences in their huge arena with proper ditches, steps and water, so too good an opportunity to pass up in the winter! Despite not being XC for 3 months Fozzy was a dude and flew everything like a pro. Cannot express how thrilled we are with him! He is a joy to take out and loves his parties.

What a year 2019 has been! It’s good to look back when the weather’s been this horrible and remember, while there have been inevitable lows, there have been lots of positives this year. There have been some real highlights but I’ll stick to my top 3 (in no particular order!) … Firstly competing at my first Winter National Championships with Ruin, something I will simply never forget. And then achieving something I’d been so close to doing several times in the past but never actually got to do…the dream of competing in a tailcoat at PSG and Inter 1!! Finally, getting out eventing again with Mr Fozzy and winning his second event getting us a lovely feature in the Horse & Hound! 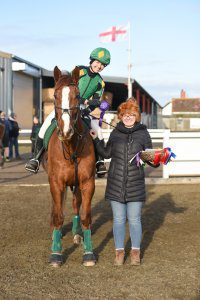 I’m so lucky to be going in to 2020 with amazing (and hilarious) horses who are all so special. Their owners are so much more than that and actually close friends. To be on this fun journey with them and their horses is just the stuff dreams are made of – literally! This lifestyle isn’t an easy one but is made doable by having the most phenomenal family and especially my mum who does so much for me. I’m so grateful to everyone who helps and supports me, I have a lot to be thankful for. Next year is looking very exciting!

Hope you all have a very Happy and Healthy New Year and Successful 2020!