Transporting horses a distance is never easy but both Rio and Fudge were very happy travellers as they went down to Gloucestershire for the RDA National Championships with our volunteers Gay, Liz, Sharon and Gill. Gay even drove the horsebox part of the way … where did you learn to do that Gay?!

Both ponies were very good even though the atmosphere and tension can sometimes gee them up. Thomas, one of our younger riders, scored an amazing 78% to come fourth in the Countryside Challenge and Emily came second in her freestyle to music test with a score of 72% so two happy competitors and two lovely rosettes!

This month Rio and Fudge were lucky recipients of a couple of Hay Play feeders from Parrallax. They donated them to us so that we could try and keep both greedy ponies in check. The idea is that the hay takes longer to eat as they have to work at it; not something Rio would choose to do as he loves his food and is a bolter!  They seem to enjoy playing with them though, and have worked out how to get access to their food so they have been received successfully so far. 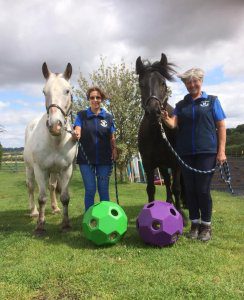 Although close to the Championships Karen suggested we take part in the Scropton RDA Fun Day so a group of us went over to Derbyshire to take part in both dressage and level 1 show jumping. As I had not qualified for the Nationals this was another chance to have a go despite that I had thought that my competing was over for the year. With the weakness in my leg still causing difficulties I was particularly keen to see if I could do a test which incorporated a bit of trotting so duly entered a walk trot option. Right up until the last day I was concerned about whether I could do it but was determined to have a try. If I failed at least I’d have tried but if I managed it I would feel like I had clawed back some of my progression. For some reason I felt more nervous of this than when doing the Regional competition!

Since I began riding I have used a little gel pad to help me balance out my scoliosis curve. It’s a bit of a Heath Robinson thing but has worked amazingly well for me. However, recent lessons have seen me falling out the right hand door more often than not. In fact a walk around the field saw me almost sliding under Rio’s belly as I slid gracefully sideways! Why this is happening now I’m not sure although I would like to think that perhaps after four years I have improved my core to the extent that it is keeping me upright and centred despite the pad rather than because of it.  Sliding right handed is also made worse as Rio has a tendency to fall out the same way which makes it doubly harder for me to keep centred and upright. Trust me to be riding a pony that falls out in the same direction as me!

Anyway, we decided to try riding without this contraption to see if it was now getting in the way rather than helping. I must admit to being nervous about giving it up and tried to slip it past my coach Karen. But she remembered we had discussed not using it so I was despatched to the comfort room to remove it!  Shucks! So I had my first lesson in four years without it – and strangely I didn’t feel that different so maybe my core has improved substantially. 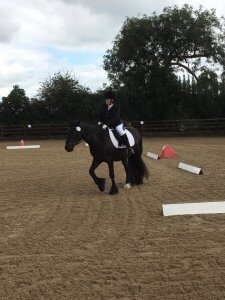 The next thing was to see if I could do my test without it. Although my lesson showed I perhaps no longer needed it I did feel as if I was losing my security blanket.  Could I do the test without it?  I decided I had to give it a go. As the clock ticked down to my test time we began our working in. Rio was very forward but I felt fine and well able to manage him which was a first in some ways,  and not having the gel pad didn’t feel as strange as I thought it would. The working in arena is not huge but we even did a little bit of trotting to get him loosened up which in itself was an improvement as I have never felt confident about trotting him in small area. But it went well and I felt very positive about the whole thing.

So we arrived in the arena for our test. Dry mouth. Would he be a good boy?  He was excellent. No whinnying today or stopping to have a poo!  Trying to stay in the moment and work through the elements we traversed the arena.  I think we did a reasonable test and I did manage to do both trots although the final one was a little more hesitant. But I did TROT twice so proved to myself I could do it. My main mistake was trying my new method of keep him straight up the final centre line walk but unfortunately he thought I was trying to leg yield him so we ended on a very crooked note. Only having one leg can have its disadvantages sometimes; too little pushing and not much happens, too much and he goes into leg yield mode but just enough keeps him straight. He obviously had his leg yielding head on that day!  But it’s all experience and learning ring craft.

Overall we had a successful day. Tracy received a first place rosette for her test and I still managed third place on 69.4% which was very respectable. I suspect the judges were a little kinder because it was a have a go day but nevertheless I was happy with it.

August arrived and with it our annual Fun Dog Show. The weather was very up and down but despite a few showers the rain held off…mostly…and we had sun and a gentle breeze. As usual lots of different dogs came along; retrievers, German shepherds, a beagle and cockapoo as well as lots of mutts. The classes were well supported and it was so lovely to see many of the youngsters sporting the rosettes their dog had won. Along with our Quiz in January the Dog Show helps raise important funds to keep us going so it’s always humbling to see how many people turn out to support us. With the classes, the home-made cake and tea stall (always popular), and the tombola we made over £800 which was marvellous.

Silver Hour continues and the equine therapy sessions have become quite popular so we are now alternating the two care homes who visit regularly. We also ran a couple of sessions for young adults with mental health issues and those attending really enjoyed their time with us. Even those who were less confident around horses soon found themselves up close and personal with Betsy, Rio, Murphy and Fudge. Our horses are awesome and just seem to know how to behave when they are being used as equine therapy. Betsy is kind and gentle whereas Rio is a little more boisterous but only because he loves people and being fussed. Murphy loves being with his beloved George, one of our regular Silver Hour attendees and Fudge is just Fudge; loving the attention and standing quietly and calmly as he is stroked and petted.  All of the horses and ponies taking part seem to empathise with the participants and it’s interesting to see how they modify their behaviour in these sessions.

So as summer moves forward to autumn things quieten down but we did hold a fun day for a group of youngsters  from Belvoir Vale RDA centre. Roma our old pony came back to visit and the youngsters all enjoyed a walk around the field edges before sitting down to a picnic.  It rained a bit, but who cares?  The ponies didn’t mind a bit of wet and everyone still had a good time, and it was nice to see Roma as he was the very first pony I sat on when I began my riding journey. I have to say he looks a million dollars and seems to be loving his new home.