In my last blog I told you about how I started visiting hospital wards. I explained that my visits to our local hospital had been filmed by Somerset Live, and how that was the beginning of something much bigger than I or ‘the management’ (my owners!) ever imagined!

Life was pretty hectic for the whole family at that time…two legged and four legged members alike! 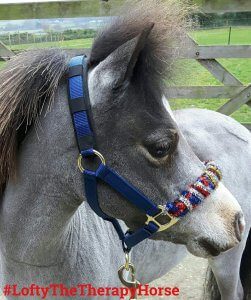 I was getting lots of enquiries to visit other hospitals and nursing homes now that so many more people had seen or heard about me…but I was far too busy eating grass and snoozing in the shade to deal with them…plus, to be honest, it’s pretty difficult to hold a mobile phone with a hoof…and even more impossible to text with one! So it was down to ‘Groom’ to answer the calls, reply to the enquiries and organise my therapy visits (that’s what grooms are for, isn’t it…to order our feed, hay, bedding and make appointments for us with the farrier, vet and dentist, etc?!) and ‘Groom’ did a very good job…after all her other job is as a veterinary receptionist…so I was in good hands!

I didn’t know much about what was going on inside the house, as I was still living in the garden – with my converted summer house stable at the top! But my dog pals ‘Freddie, Phoenix and Penny’…and Patch (the cat!) told me that inside there were boxes…everywhere!

I’d been living at the livery yard with my big friend ‘Bertie’, the coloured cob, before he’d gone off to Catherston Stud with ‘Groom’s’ daughter, Jade, and I’d moved in to the ‘management’s’ home – well…not literally! Like I said earlier…I had my own gaffe outside the house, at the top of the garden…which suited me very well!

‘Groom’ had told me it was only going to be for a few months, and as I don’t own a diary (that’s what ‘Groom’s’ are for!) I had no idea that six months had passed – time flies when you’re having fun…and you’re becoming quite a well known equine superstar!

So everything was packed up…including me…along with all my rugs, buckets, brushes, wheelbarrow, etc into the horsebox – ‘Groom’ said I seemed to have as much, if not more, as the two legged members of the household!

After a short journey I arrived at our new home in the country which had a lot more grass than the garden I’d enjoyed for the past six months! I had to have a small section of the field fenced off to stop me eating too much grass and making myself ill! It was certainly a case of ‘the grass is greener on the other side of the fence’ (literally in this case!) but not all in one go I was told!

At our new home I didn’t have a converted summerhouse to live in anymore (although there was a cute swiss style wendy house in the garden – it was just a tad too small for me!)…I now had a proper stable again…right next to ‘Bertie’ who arrived back from his dressage diva experience a few days later…with so much to say! We had lots to tell each other – after all…we’d both had a very exciting six months! 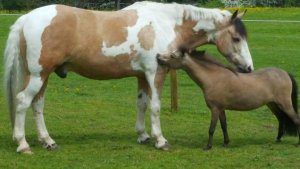 It was great to be back with Bertie again and we settled in to our new home together straight away.

Bertie told me he’d been to quite a few competitions with Jade and that he’d done pretty well…winning rosettes and gaining british dressage points…he’d also competed in dressage to music…called ‘freestyle’…and he’d even qualified and competed at the BD regionals!

It all sounded very exciting and I was very impressed…but I think I impressed Bertie a bit too…when I told him that little old me had actually been up and down in hospital lifts, I’d made lots of people feel better, cheered them up…and I’d also been in a couple of little ‘films’ – not like the ones you go to see at the cinema obviously…but they’d still been viewed by thousands online…which made me feel like a film star!

Over the next few months Bertie went out hacking with ‘Groom’ and they also went for western lessons together – he went from dressage diva to cowboy horse in no time at all! They even won three gold medals and one bronze at a western competition!

I was also kept busy…visiting hospitals, hospices and nursing homes…and I was really enjoying it!

Not only was I now sponsored by Teddy Mountain (with my amazing little trainers!)…other lovely companies had heard about what I was doing too…

So I was also lucky enough to be sponsored by High Fashion Equine, who kindly sent me regular parcels of glitter, horse safe glue and stencils so that ‘Groom’ could make me look even more cute with eye catching glitter stencils on my bottom to brighten up the day of everyone I met! KM Elite Equestrian sent me a very smart headcollar and leadrope – it fitted perfectly and was really comfortable and soft. They also sent me a brilliant mini pony sized haynet and horse treats! And Nytack Equestrian, who make fancy dress outfits for ponies (and also made the outfit for the pony that appeared on channel 5’s Big Brother!) sent me my very own personalised ‘Lofty The Therapy Horse’ sparkly rug too!

I felt very special receiving all these lovely things that helped make my therapy visits even better!

Then Bertie and I had some very exciting news! ‘Groom’ told us that we had something very exciting arriving to help with the therapy visits… 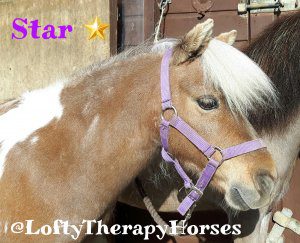 And her name was ‘Starburst’! She was a 32” American Miniature sorrel pinto (brown and white) mare. Originally all the way from Texas (when she was just six months old), but had been living at Dandy Miniatures in Cheshire since arriving in the uk where she had bred some beautiful foals and had then become a much loved pony party pony…but was being very kindly donated to us to become a therapy horse!

We were VERY excited!

But that’s another story…for next month!