Izzy is a 19 year old grade IV para dressage rider from Leeds, currently on the BEF UK Sport, Lottery funded World Class Podium potential programme 2018-2020.  Izzy was diagnosed with cerebral palsy causing right sided hemiplegia before she was a year old and Izzy began riding when she was just 2 yrs old with encouragement from her horsey mum, and it served as a form of physiotherapy, teaching her to balance and use her right hand and leg.

In 2012 Izzy watched Sophie Wells compete at London Paralympics and was totally inspired and her love of Para Dressage began. Izzy made contact with Sophie and their coach/student relationship took off. Izzy has been mentored by Sophie since 2013 and has trained with Sophie since 2016.  Izzy has been fortunate to have been lucky enough to compete Sophie’s London horse Pinocchio internationally and also ride Touchdown M Sophie’s 2008 Beijing miracle horse, who recovered from injury and retirement age 8. Touchdown and Izzy were reserve for the European Championships in 2017 and reserve for the World Equestrian Games in 2018, before Touchy retired last year. 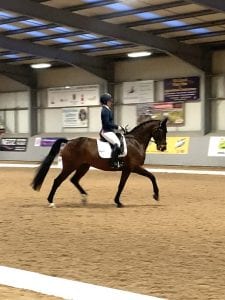 In November 2019 following the retirement of Touchy, Izzy was offered the ride on Showfox (Foxy) an 11 year old part bred Trakehner mare, owned by Jane McWilliam and the pair have great plans for the future.  They have started well with placings at the National Championships and impressing the selectors at training events.

“We Had planned planned to compete in the gold semi finals at Wellington in June, Hartpury CPEDI 3* in July and Bishop Burton CPEDI 3* in August, but with the current lock-down of all equestrian activities we will have to wait and see when the competition calendar re-opens” Izzy told us.

We asked Izzy what makes Foxy special and what quirks she may have, “Foxy likes to put her ears back at herself in the mirror as we are riding past which makes me laugh!  She is a sensitive, super cute character, takes her time and is never in a rush, which suits and matches my personality well!” Clearly they are made for each other. 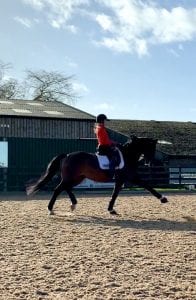 These two are definitely ones to watch and we look forward to following their campaign towards a Paralympic Medal.