In January I was given a date in early February for my long-awaited shoulder surgery. I knew, then, that I’d need to try and get my entry for this year’s RDA Filmed Vaulting Competition done early, because I didn’t know how long it would take for me to recover but the predictions weren’t great.

I filmed two entries, each consisting of compulsories and freestyle. One was on the barrel horse at home, and the other was on the horse at Contessa (where I coach). The barrel routine was technically more demanding but the one on the horse had its challenges too – I couldn’t hear the music at all because I don’t wear my hearing aids when I’m vaulting (in case they fall out and get trampled!) and the sound just didn’t reach me. It was also the first time I’d done the routine since the British last October, and probably only the fourth or fifth time I’d done leg swings in canter – but never mind! It looked OK on the video so hopefully it’ll be good enough.

A couple of weeks ago I headed to Contessa again to film my tests for the RDA Dressage Anywhere qualifier. The qualifiers run from the summer to March but because of all the problems we’ve had at RDA with having horses to ride (none last term and a slightly precarious team this term) I had put off sorting it out until almost the last minute. I suddenly realised that I had barely any time left to get it done and so I hastily booked a lesson on Hamish, our smaller vaulting horse. I don’t really know the non-vaulting horses at the yard and Hamish seemed like a good, safe, bet.

I do like Hamish – he’s a sweetheart for vaulting – but we didn’t get on amazingly well when it came to dressage! He was a bit confused by my bar reins, and I’m not as clear with all my other aids as I would like to be. There was no way I could get him round a 15m circle in canter with those reins so for the canter test we decided that I’d move the bars right down so that I could try and ride with two hands.

I know this sounds a bit weird, but I find riding with both hands really nerve-wracking! I always worry that I’m jabbing the horse in the mouth, or that I’ll drop the rein (it has happened…). The balance is also different for me, so everything feels really odd. On the other hand, on this occasion it was what was required because we did, just, get our canter circles!

Both tests were a bit of a disaster, to be frank. The canter test was easily the hardest I’ve attempted and there were multiple elements which just didn’t really happen… We also added one of our own: ‘halt and poo’ in place of ‘medium canter’!

I wanted to try the canter one just to see what I could do if I really pushed myself. I do believe I’d have done a better job on a different horse – not because Hamish isn’t great (he put up with so much that day!) but just because I would know them better. It is hard to hop on a horse when you’ve only ever lunged them once or twice, or stood on their back in walk, and attempt to do a dressage test – but what’s life without a few challenges?!

We also entered a trot test and, to be honest, I felt I rode it really badly. There were two ten metre circles at D which I thought were particularly hideous (this was at the point that Hamish and I were still negotiating on the bar reins front), but fortunately from the camera angle they looked an awful lot better than they were! Anyway, we qualified for the Championship round with the trot test with a score of 68.82%.

The canter test scored 58.80% which, all things considered, was generous! Never mind – it was fun to try, and I have a lot of ideas now about how I could do it better another time.

A week after the dressage tests I was back at Contessa again for yet more filming. This time, though, it wasn’t a competition. The vaulting group had been chosen by a very famous designer (can’t say who just yet!) to model their new kids’ range of active clothing – a huge honour and a great opportunity for all our little vaulters. 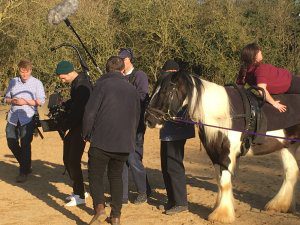 The day of filming happened to coincide with my birthday so I had the most amazing birthday ever! The horses were absolute stars, with Puro (the big canter horse) quite happily coping with vaulters on his back, a ‘deadcat’ microphone by his head, and a large camera and several more people than usual close on his inside, without batting an eyelid – despite his enthusiastic introduction to the camera crew when he first passage-ed his way out of his stable!

Hamish was also a superstar – he was a little warier than Puro at first but it wasn’t long before he had his mind on the job and was showing off his fabulously clean and luscious locks.

The vaulters really did us proud. They were, understandably, a bit excitable but were commended by the film crew on how easy they were to work with and how well they all got on together. On a day when a different group of children might have had tantrums about not being in every shot, our vaulters cheered each other on regardless and had a great, workmanlike attitude.

There were also some personal standout performances, such as some gaining an independent stand for the first time. It was a long day for them but everyone went home brimming with excitement, happiness and pride. What more could you ask for?!

Finally, I’ve just been on a vlogging workshop in London with RDA – a few other participants from across the country and some RDA staff. I wasn’t sure what it would be like but it was lots of fun and I’m now slightly more comfortable with talking to a camera! Hopefully you will soon be able to see the fruits of my labour on a YouTube channel near you…