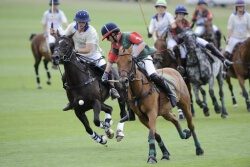 The Pony Club Polo Championships, held 06  August at Hurtwood Park, Surrey, and 10-12 August at Cowdray Park, West Sussex saw some amazing displays from the next generation of Polo talent, with support from sponsor Flannels.

The Championships kicked off at Hurtwood Park with the Jorrocks section, for players under 11 years old riding ponies not exceeding 13.2hh.

Taking the top spot was the Old Surrey & Burstow Hunt team made up of Cowdray Hunt’s Ava Greenland (10, whose pony, Beano, also picked up the Polo Times Best Playing Polo Award), Matias Maldonado (8), Bruno Bradshaw (9, from the Grafton Hunt) and Jasmine Speed (8, from the Cottesmore Hunt). Matias and Bruno are no strangers to the podium, as they formed part of the 2017 winning team playing for Grafton Hunt.

In second place was the Crawley & Horsham Hunt Purple team. The team, consisting of Suzannah Clark (10), Sienna Nightingale (10), Annalise Maurice-Jones (11) and Georgia Stephens (11) also picked up two individual awards; with Suzannah winning the Jorrocks Cup for Most Improved Girl and Sienna winning the award for Most Promising First Year Player.

After two days of play the finals, held on Cowdray’s hallowed Lawns I, were plagued by rain which led to the traditional parade of all players sadly being cancelled.

Instead, proceedings began with the presentation of the Jambo Trophy, for the best combination that hunts and plays Pony Club Polo. This was awarded to Esther ridden by Scarlett Picksley (11) from the West Hants Branch.

Rosanna also picked up the SATS Saddle Award for Best Player of the Season. A delighted Rosanna said: “It’s incredible! This season has just been absolutely extraordinary and I can’t really believe how everything has come together. I am just so grateful to everyone for all their help.

“This is my last season playing Pony Club Polo as I will be too old next year, so the saddle is such a nice finishing touch. We’ve never had a new saddle before, they’ve always been second hand, so this is pretty cool!”

The team, who took home the Daily Telegraph Trophy as well as the Jaguar Trophy for finishing on top in the Gannon League, said they were ‘overwhelmed’ and talked about how they started in the lower leagues and worked their way up as a team. They said: “We’re a team of mates where everyone has the same ability. There’s no one outstanding player that carries us; we all have something to offer.”

As the afternoon progressed other section victories were;

Pony Club Polo Chairman, Charles Whittington, said: “The Pony Club Polo Championships were a great success again this year, marred only by the untimely appearance of rain! We are fortunate to have use of the best grounds at Cowdray Park Polo Club, and our thanks go to them and all our sponsors.

“Too few people realise that Pony Club Polo provides tournaments for players with only one pony from age 6 to age 21, and we would like to encourage more to take advantage of this opportunity.”

A full set of results can be found HERE