Team GBR began the day in silver medal position behind the hosts Germany. 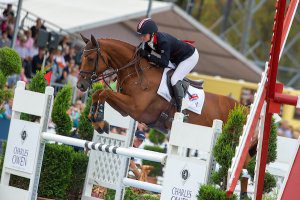 The first Team GBR rider into the showjumping arena was Tina Cook on Elisabeth Murdoch’s Billy The Red. They put in a faultless display to finish the championships on 63.9. Tina commented afterwards “He’s a fantastic showjumping horse with a very good record of jumping clear rounds. He’s reliable on the final phase, which is why it’s so frustrating that he had one blip in the cross-country phase because I’d love to be challenging for an individual medal. But overall he’s done a good job here and proved to be really solid.”

Pippa Funnell on her own and Marek Sebestak’s Majas Hope put in a foot-perfect performance as pathfinder in the cross-country phase yesterday and followed it up with just one pole down in the showjumping to finish with a final score of 39.4 in 22nd position. She said afterwards “It’s gutting because I should be jumping a clear round. He just got a bit tight and took the back rail, that’s all. I’m thrilled with him but I just hope it won’t be too costly. Any good horse can have one down, it’s just frustrating. ”

The next rider for the team was Piggy French on Jayne McGivern’s Quarrycrest Echo. They were another combination who lowered just one unfortunate pole in an otherwise strong round, bringing their score to 33.8 for 15th position. Following her round, she said: “Obviously there have been a few little frustrations this week. [Quarrycrest Echo] is a super horse, probably the best jumper I’ve had on the final day, but that’s horses – they aren’t machines. You take what day you’re given with them. He just felt as though it took him six jumps to wake up, but he’s finished well so I’m pleased.” 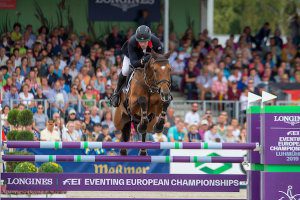 The team’s anchor rider Oliver Townend on Angela Hislop’s Cooley Master Class had begun the day fifth in the individual standings after a faultless round in the cross-country phase. They started well but Cooley Master Class failed to take off at the plank fence, having it down. This dropped Oliver out of contention for an individual medal and briefly lowered the team to bronze medal position, but they rallied and completed the rest of the round without any further problems.

Commenting on his round, after problems for French rider Thibaut Vallette meant that Great Britain were back in silver medal position, Oliver said: “I’m obviously disappointed, especially for Angela. They like to make you look like monkeys, these horses. He normally loves planks and verticals – that’s when he throws his best jump – and I felt as though I was in my normal place, gave him a squeeze and we just never took off. What happened matters to me, but it didn’t matter to the team and that’s the important thing here.”  That meant Team GBR finished in silver medal position and claimed their 17th team medal in the European Championships. 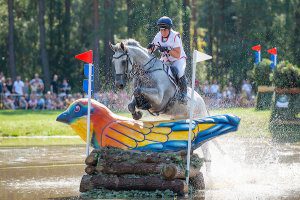 Kitty King, who was competing as an individual, finished as the highest placed British rider in seventh. She jumped an immaculate clear round on Diana Bown, Sally Eyre, Samantha Wilson and Sally Lloyd Baker’s Vendredi Biats, who was here on his senior championship debut.  A delighted Kitty commented:“It means everything. Even competing as an individual, you’re still representing your country and you just want to do a good job and not let anybody down. We had a little error in the dressage and picked up a few time faults yesterday, but overall [Vendredi Biats] came here and has done his absolute best for me.”

Commenting on his squad’s performance this week, Chef d’Equipe said: “I’m so proud of my team. There were such strong performances across the disciplines. I’d also like to congratulate the German team on their victory. A team silver medal is fantastic, but the focus of our attention now turns to Tokyo.”