Last time I wrote was preparing for the English Vaulting Championships and hoping to qualify for the British Champs. It feels like a long time ago now! I thought it would be interesting to do something a bit different to a normal update and tell you a bit about how it feels for me to adapt to a new horse for a vaulting competition.

For all of my competitions for the last year or more I’ve had to borrow a horse from another club, and unless I’ve had the luxury of vaulting on them at a previous competition I generally meet them for the first time on the morning of the competition. It’s not particularly unusual for vaulters to compete on borrowed horses, but it is unusual to do it as much as I do! It’s definitely challenging – you have to adapt very quickly to the horse’s physique and stride, as well as to the roller that they’re using, which can vary widely and is especially important to paras (the handle shape determines a lot of your stability in the freestyle moves, especially when you can’t feel your feet/legs). 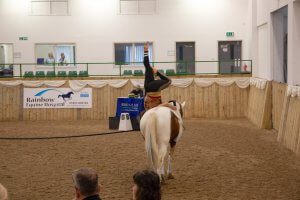 This post is based on my experiences vaulting on Rio (Briardale Lothario), owned by Reivers Vaulting Group (Scotland), at the British Championships.

Because warm up on the horse for vaulting competitions is always extremely limited there isn’t really much time to get used to a new horse’s paces before you go in to compete, and I definitely felt that I hadn’t got used to Rio’s canter before doing my compulsories. My heart says that I can just get on with the job whatever the horse is doing but my head – having learned from experience – knows that failing to appreciate the complexities of the new canter is a recipe for disaster. 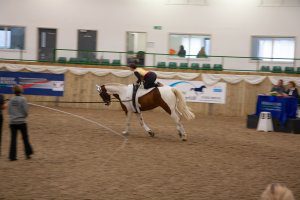 It’s hard to explain because there aren’t many people in the world who do vaulting on a cantering horse when they can’t feel half their body (in fact, I don’t know if anyone else is in this position). It’s easiest to compare it to how I feel vaulting on a horse I know well. For them, practice has taught me what the canter looks and feels like from the ground, as the lunger, and as the vaulter. I know how their movement translates up through my body to the parts that I can feel. Every single moment of every single move has to be translated in that way and although no horse is completely consistent you do develop a good understanding of the individual horse, which is also essential for detecting those minute changes in a horse’s pace when they drop concentration or energy.

When I vault on a new horse I have to begin that translation process all over again – it’s like having to translate a new language or dialect; it takes time to build up the knowledge and understanding to make that process fluent. There aren’t really any short cuts, although you can find ways to paper over the cracks: just as you can use exaggerated gestures and expressions in an unfamiliar language, on the horse I can lock into a few key points (e.g. hip height, which I gauge through trying to feel my lower back) which help me to assess where I am. 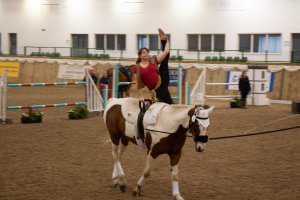 Unfortunately, this system is tricky and not foolproof, because the state of my hips, back, chest and shoulders (my main ‘translation points’) is constantly changing, especially with the scoliosis. To push the languages metaphor to the limit (!), this is rather like messing with the alphabet. If you can’t remember the alphabet, or if the letters change order, it takes more time and effort to translate your message. Because my ‘alphabet’ keeps changing (i.e. what I can and can’t feel, and the accuracy of my ‘translation points’) I’m constantly adapting not only the language of translation but also the tools used to complete the process.

Clearly this all has to be done with any horse I sit on, but in vaulting it’s harder than riding. You don’t have as much to help keep you in place (no saddle or stirrups, for example) and, obviously, you have to move out of the sitting position. You’re also always on a 15m circle which magnifies the peculiarities of an individual horse’s canter, compared to riding around an arena or out in the open. The upshot is that for a few simple and brief moves there is an immense mental effort going into what I’m doing, simply to make up for what I can’t feel.

What really takes the mickey is when my body decides to be even less co-operative than usual! My left side is generally worse than my right, because the shoulder has had far more problems (affecting the whole left arm and hand) and, although my left leg is marginally stronger than the right on its own, its movement and control is limited by my scoliosis. I don’t use my left hand when riding but try to use it when vaulting. For my compulsories at the British, it decided to go into spasm so I couldn’t use it to hold myself on for the last move, and the tension this caused down my back inevitably cramped my left leg up too, making it even harder to move than normal. Apart from the basic seat (the first move) which was OK I felt pretty disappointed with the compulsories. 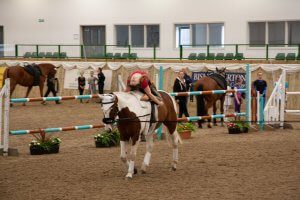 Adjusting to a new horse’s walk is easier than adjusting to the canter, but only because the forces acting on you are lesser and so it feels less scary and death rather less imminent! There are key moves I know I need to practise on a new horse above all others, particularly where they might be affected by a different roller, such as the mount and dismount, shoulder stand, rolls, any moves using the stirrups (which vary from roller to roller) and stand. Again, there’s little time in warm up to do these moves more than once or twice, but it is crucial to have enough time to get to know how the moves feel on this horse with this equipment, and to get a feel for how the moves flow from one another.

I don’t remember much about the freestyle now other than knowing that on day 1 it went OK but there were some things to improve, and on day 2 I made most of those improvements and then, gut-wrenchingly, fell on the dismount for the first time ever in competition (I had fallen over doing it plenty of times in training!).

Overall, I wasn’t very pleased with the weekend’s performances. I was left feeling that I’m getting worse and worse, which I know is inevitable due to my disability, but which feels very unfair given how hard I’m working. Mind you, if I weren’t working hard then I’d be even worse!

Training should ideally, of course, be about improving, but for me at the moment it feels like damage limitation: it’s all about trying not to get too much worse. There is, therefore, a big mental battle going on here. I’ll write about that some other time!