This is a bit of a voyage of discovery for me, and it’s a big old topic so in the interests of not taking up too much of your time, I’m going to split it into a few chunks over the next few months. Welcome to Chunk the First – Who, What, Why, Where, When?!

Each year in July, the Riding for the Disabled Association runs its National Championships at Hartpury College. RDA participants can compete in a range of disciplines, and over the last few years the vaulting side has really taken off, with vaulters competing on the horse or the barrel.

Why: The value of barrel competition

Barrel training is a crucial part of any vaulting club but particularly for RDA Groups, which may not have access to suitably-trained horses and helpers. It also gives those who are a bit nervous, or who find mounting difficult, another way to participate safely and to gain confidence.

Beyond just training, having a pathway to competition on the barrel is vital for empowering those participants for whom competing on the horse is an impossibility. I really believe that competition drives performance and achievement, both of which have a substantial impact on a disabled person’s mental and physical wellbeing. In the interests of as many people benefitting from this as possible it’s incredibly beneficial that RDA vaulters have the opportunity to demonstrate and celebrate their skills on the barrel as well as the horse.

What: Vital statistics for the uninitiated!

What is needed for an RDA vaulting team freestyle routine? 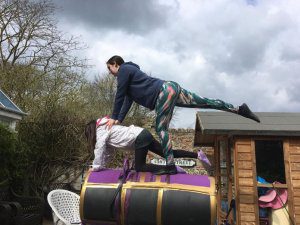 Kodie and Kate trying a flare leg and arabesque

Testing transitions took, well, ages. It was like one of those ghastly maths problems where you have to work out how many handshakes take place at a party, except that there are fifty moves which can come before or after any other move, and each move can have one or two people in it, and there can be various different ways of transitioning into or out of it. Add in the fact that I am only one person and had nobody to experiment with, and I had to try and take into account all the different disabilities of all six of us, and you can see why it took me a very, very, VERY long time!

By this stage I had a fairly good idea of what I thought would and wouldn’t work in practice. It was tricky taking into account the different disabilities and capabilities of the team as a whole – something I can’t do, for example, another vaulter can, and vice versa. So, next I needed to go through this process:

It was tough to get to this stage, but depressingly this is the first stage that anyone will really see any evidence of when we compete! I needed to go from the endless options to one final plan. This plan needed to:

So that’s pretty much where I’m up to at the moment. Next month I’ll tell you more about how I’m trying to make the routine stand out and work as a coherent – and fun! – performance.