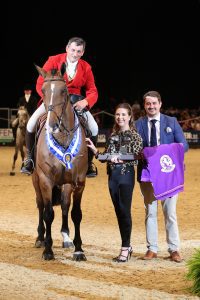 When the Andrews Bowen International Arena is transformed into an exhilarating ride across country you know it’s time for the famous Cuddy Working Hunter – a Championship which first ran at Horse of the Year Show (HOYS) back in 1951! A big course with plenty of questions is not only a beautiful sight to behold, but a field for some fierce competition.

David Cole once again built a suitably testing course to mark HOYS’ 70th anniversary and pick out the bravest of the 40 starters. After the conformation and ride judging, just 10 combinations were invited back in the evening for the final decision.

Rebecca Collins’ nine-year-old Irish Sport Horse Atlantic Slim was victorious with Rory Gilsenan in the saddle, who was celebrating his first ever Cuddy Working Hunter title at HOYS, and after just a month back together with the bay gelding.

“I’ve had lots of other placings over the years but to win tonight is fabulous,” said Rory. “I was surprised how big the course was, but it was built to allow you to really ride forward like going across country. It took a lot of jumping and he [Atlantic Slim] put in a supreme effort. There was a real swing to the course, the surface was great to jump off and it was exciting.”

Rory bought the horse as a five-year-old for his previous owner Katie Leatham. He has been with Rebecca for a year but, following a knee injury, it was decided Rory would take the ride at HOYS when they met at the Royal Three Counties Show where the horse qualified.

A delighted Rebecca was watching from the sidelines: “I never thought we’d have a winner at HOYS; not in a million years!”

“He’s a traditional Irish Sports Horse, deep bodied and both bold and careful, which you don’t always get together,” said Rebecca. “We’re looking forward to doing more workers and show jumping in the future.”